This is a first in a series called:

“Favorite Places on the Planet.”

There’s a beach-bum in all of us, but it takes that lounge lizard to find just the right hot spots.  A lizard whom seeks only the ultimate in life’s little pleasures. Because that is why we are all here, right?  If not for the pleasure(s) in life, what is there left to seek?

Bondi Beach. Sydney, Australia. 1997. 21 years old and I was a virgin on the travel beat. I’d traveled domestically and within The United States several times in my young years, but I had never traveled internationally, like over the ocean! 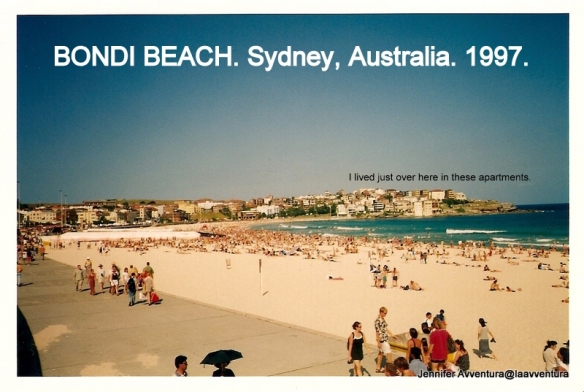 I was very young, and very naïve in Australia, I savoured every moment. My mother asked me several times before I set off on this wicked year of excursions “Well, what are you going to do? Where are you going to sleep? How are you going to eat?” END_OF_DOCUMENT_TOKEN_TO_BE_REPLACED

I want to write but I can’t find the words.  Heavy dense clouds dance outside the bay windows; playing with my mind, stealing my words.  Please enjoy the following pics I took from a recent hike.

END_OF_DOCUMENT_TOKEN_TO_BE_REPLACED

So you want to give up everything, eh?  Move to another country, get a job in a small café in Australia and become a beach bum?  It’s easy to do and you don’t need a university degree to do it. END_OF_DOCUMENT_TOKEN_TO_BE_REPLACED

It’s a typically slow, freezing-cold January night, and she’s already been working four hours into her usual four table section in a five hundred seat restaurant. Eleven foot tall windows outline fifty percent of the dining room and with arms stretched out wide she has a spectacular view of Niagara Falls. She never tires of the view, she’s always lived in beautiful pristine places; but this was different, it wasn’t the beach. It wasn’t that deep down warm feeling she felt sitting in hot sand with the ocean at her toes and the sun beating down its mid afternoon rays, no, this shit weather brought out the worst in her, it was only by the ocean that she identified with herself. The only place she feels herself, her sanctuary from the ordinary, she tucks herself into pockets of the world; living, breathing, thriving and developing her sense of self. She craves to have that feeling again and wishes winter would fuck right off. The dirty mess of melting snow, too many below zero to care and the constant brushing of the car was making her one miserable thirty year old woman. It was time she escaped the snow shit capital and seek the refuge that the ocean provides. 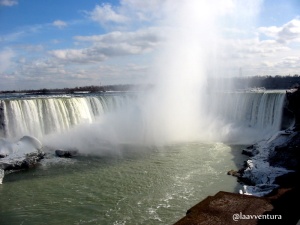 Barely making small talk with her tables, she doesn’t care where they came from, where they are going or what they are doing in The Falls.

“Yes sir, I understand, but you are in Canada and the change from your bill will be in Canadian dollars.”

The customers look at her with puzzled bewilderment and she contemplates pointing out the brightly illuminated international border that they crossed. But bites her tongue instead. It hurts. She doesn’t care. She has no time for stupidity. She is polite, professional and to the point, if her customers give, she will give. She has been in this industry for twenty-two years and has had enough of being a servant.

Her mind is like a busy airport linking her identity together, like points on the compass she never truly knows which direction she is going until she gets there. She has traveled five of the seven continents, seen poverty in its depths and riches beyond her wildest dreams, she knows what she wants, isn’t afraid to speak the truth and will just about roll over anyone in her way. In the last ten years all she has done is work, save and travel, work save and travel, not a bad lifestyle by any means but it drains her bank account, and now she’s trying to figure out how to save for another odyssey and live in the meantime. The six fifty an hour job she has had for a year is paying the bills, but will barely pay for another trip or the increase in bust size she has always dreamed of. She knows with enough hard work and the larger than life white striped smile she could do both, work extra hard and survive; travel.

At times she wishes she could take a flying leap out of the atrium windows and fly away, the sense of escape intrigues her, moreover she would like to throw that irritating impossible to serve customer crashing out, spinning out of control to the pavement below. She’s groggy and hung over from ladies night, drinking two glasses of wine and two pints of Guinness she debates on calling Gina, canceling their plans for hor’dorves and cocktails later that evening.

Quickly walking into the dish pit with her usual arm load of shit: plates stacked precariously on top of each other, bread basket smashed into potatoes holding it in place, a half eaten steak dangling off the plate onto her pinky finger, she spills lobster butter down her tie and curses the hot thick liquid making a new home, balancing forks and steak knives she just about wipes out on that damn spill by the coffee station that has been there for an hour. It’s no surprise that she is able to carry the armload of junk, it’s all she’s ever done, it’s all she knows.

Entering the dish-pit the ever gregarious French head dishwasher greets her with the same excited nature he always does:
“Jana! How de ’ell are ya?”
“Oh you know, same old same old. I’m hung over and want my bed.”
“Too many boys knocking down yer door Jana, will make you a tired girl.”
If only that was the reason she felt tired, she could deal with it, but the drinks wore on her like an old sock waiting to be discarded. Unloading her armfuls, she scrapes the leftovers into the garbage and ponders on the amount of food wasted in a restaurant, it’s appalling and makes her sad. She thinks about all the restaurants worldwide and can’t fathom that there are people starving.

The dish-pit becomes busy with waiters waiting to unleash their heaps of garbage, when someone calls out:
“The main act from the Casino is here, he’s waiting for a table.”

Thoughts of doubt dance in her head, she’s in dire need of a good laugh, but she’s skeptical that he really is here. She finishes scraping the waste, washes her hands and heads directly to the dinning room and to her amazement, sure enough, it’s him! Brilliant, fucking brilliant!

His charcoal curls dangle from beneath his visor, muscles popping from his t-shirt and his smile larger than life, he is surrounded by five men and wonders if they could be his body guards. Seeing him standing in the middle of the dinning room carpe diem rings in her ears and she leaps into action. They have money, yes of course, they have plenty of money. He after all is the main act at the casino and has been for many months, she wants to dip her hand into their money pockets, she wants another beach holiday but first she must smile. Approaching him with the utmost confidence she lets them know table ten is available. They thank her, she looks directly in his eyes; their gazes locked, and in that split second she feels the fire ignite. That single look stirred passion deep within her, and she could feel her sexual allure escaping her.

They take their seats, his closest to the window, he peers out at the astonishing view, she grabs their attention,
“Good Evening Gentleman. How are you today? Have you dined with us before?” Shaking their heads left to right, “Do you mind if I take a minute and go over our menu?”
Asking them to open their menus she looks over at him, he looks at her quizzically and jokes, “My menu is upside down I can’t read it.”

Walking over to him, she turns his menu right side up, she makes direct eye contact with him, his eyes pierce her directly to the core. She tries to hide her slight sexual nervousness, she can’t look at him without feeling aroused, thoughts of devouring him passed though her mind as she launches into the menu sizzle.

“Bottom left hand corner of your menu you will notice our grilled to perfection chart, if you are in for steak this evening, which I hope you are, it’s what we do best so please take this into consideration as we do go by these guidelines. Down the center of the menu is all our steak dinners. All our steaks are center cut, well aged and perfectly marbled, which for you mean, you are in for a dynamite dinner. Top right hand corner you will find our prime rib. Our prime rib is our hero product and we are well-known for it, we slow roast it for twenty-four hours in our own special spice, tonight we are carving it at a perfect medium-rare to medium.”

She makes it though the sizzle, she doesn’t stumble over her words, she was finally getting a grip on herself, her nervousness faded as she spoke, she realized they are just another ordinary table in for dinner, with extraordinary lifestyles, and she was curious. 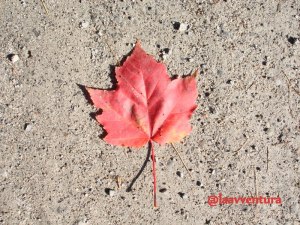 The muscles in my calves are aching as I make my way up the mountain, bags in hand. At home I unpack the groceries to our six-foot two fridge. In an hour M. will be home, sweaty from seven hours of pane and he’ll be hungry. He likes and wants me to prepare the meals, its part of his culture; that’s just what the women do. I’ve seen it at many dinner parties thrown by his friends. And this woman doesn’t mind. He’s home and greets me with a bacio and we eat. I wash the dishes in the bathroom sink; our cucina finished within the next few days, Sardinian time. In my reality of time our cucina will be finished in two to three more weeks. I’m ok with the fact that things here happen slowly, I can’t change the hand of time nor can I move a culture to rapido. After all, I am in their country trying to speak their language be it dialect or Italian; and I find myself becoming the traditional Italian housewife with the exception that I AM CANADIAN, eh! 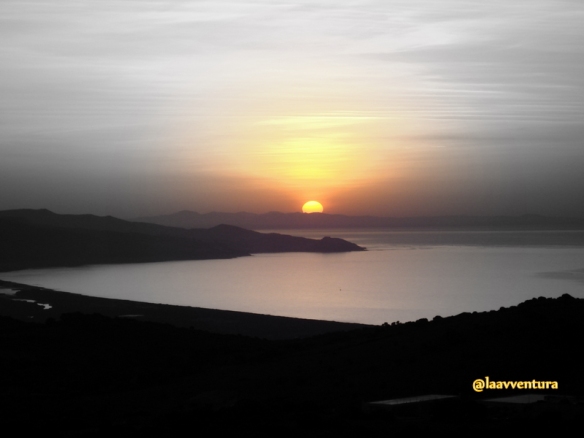 The View From My Room

Here’s a little peek into my piece of heaven. And all from the front row seat of my living room.  Bliss.  Happy Sunday. 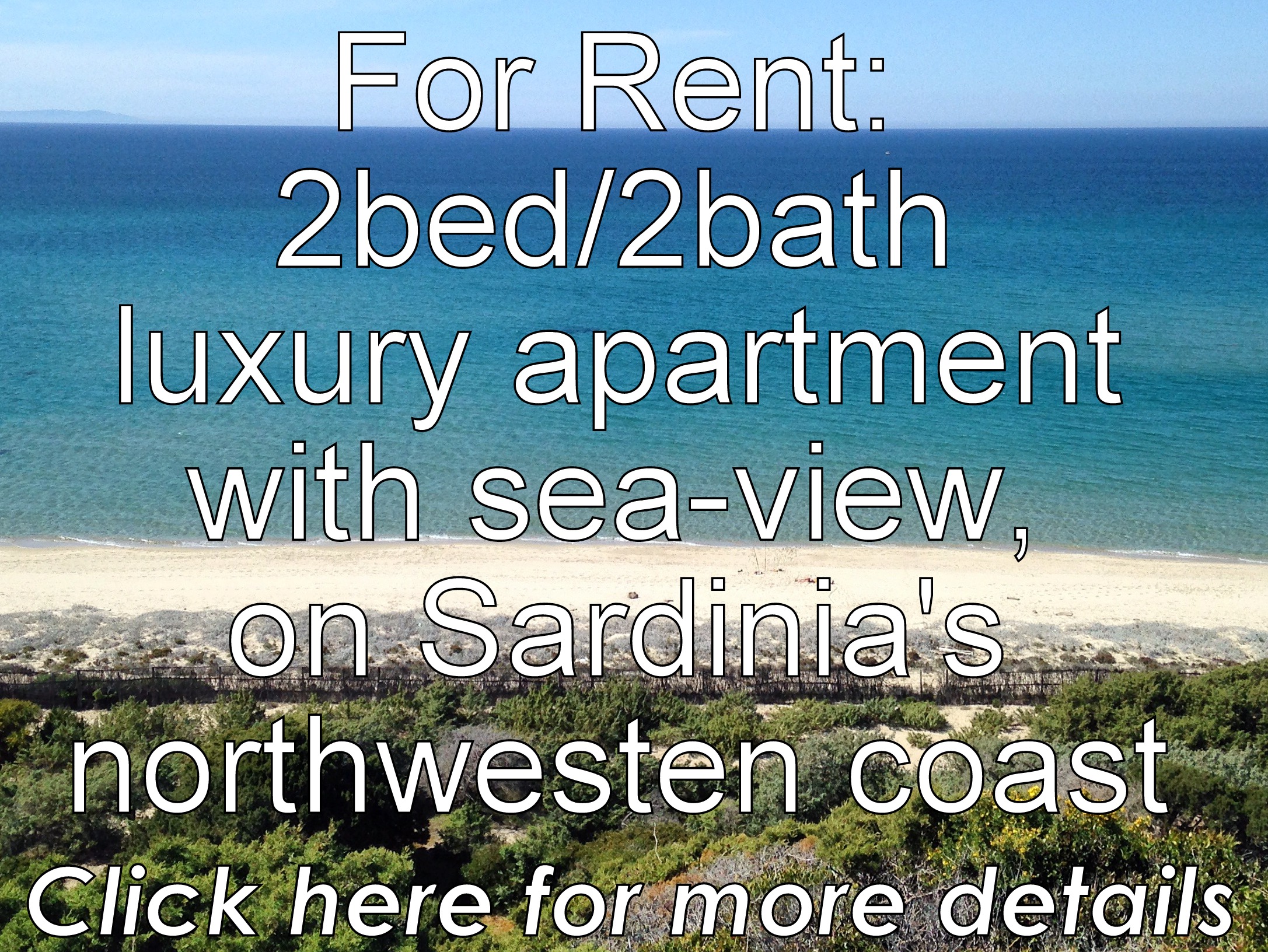 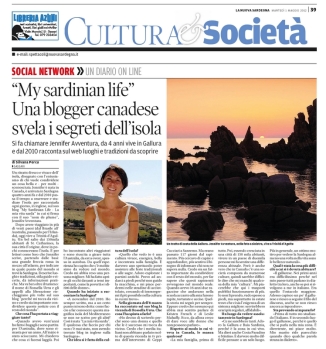 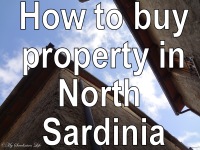 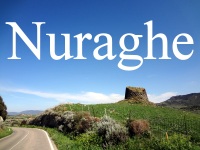