Last year, I was given a super-duper under water camera, and I’ve had a ton of fun playing under the sea at Palau, Sardinia, Italy. Sometimes there’s nothing to capture but turquoise water, waves, and wet luscious sand, but that doesn’t deter me from enjoying the many faucets of this new camera.

Other times, the sea is teeming with colourful fish, sometimes dolphins albeit in the distance and hairy-legged tourists, and it’s generally on those colourful days that I forget my camera at home and walk away only with the memories. 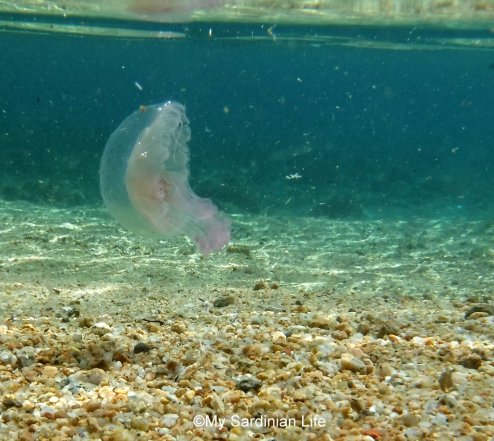 After walking away from screaming children and arguing parents, I found my own little private oasis and set up beach shop: umbrella, towel, sweaty bottle of water and my study book on how to drive in Italy. It was finally time to jump in the refreshing sea to cool off from the 40c heat we’ve had when I noticed the medusa – jellyfish. My heart skipped a beat, okay maybe two, and my legs turned to jello as I was seconds from belly flopping on this pinkish slimy Medusa that would no doubt cause severe pain. I jumped back and quickly grabbed my camera, I mean, who in their right mind grabs a camera to photograph one of the worlds most poisonous species? I do.

Luckily, as a passerby came around, I mentioned the jellyfish to him and he told me it was already dead and is not poisonous at that point. Whether that’s true or not, I’m still not taking any chances and didn’t even take a refreshing swim.

Have you ever been stung by a jellyfish?

11 thoughts on “Playing Under the Sea at Palau”