It was beautiful this morning when I decided to tie on my runners and head out in the beautiful Autumn morning. At around the 2k mark a slight stitch came into my side and I ignored it – like I usually do, it goes away. I was just about at my half-way mark –  3k away from home when I heard the familiar jingle-jangle in the bushes.

I couldn’t see them, but I could hear them. I’ve seen these dogs in these mountains several times on my runs and they have never attacked or even come close to me. I continued to my half-way mark when I heard voices.

That’s right! It’s October – open hunting season has begun in Sardinia. I stopped running and settled for a walk as I wanted to hear where the voices where coming from. The voices were not far in the distance and the jingle-jangle of the dogs’ bells were close – too close. Then I heard it.

It was close, too close. Probably only 10 meters away from the point where I stood. The sound was deafening and I was scared. I hit the pavement with such speed it made my head spin. Still on the ground wondering what my next move would be I notice a hunting dog jump out from the bushes. He saw me – I saw him and I froze. He watched me for what seemed like an eternity until he realized I’m not the prey and he returned to his duties in the bushes – with the hunters. 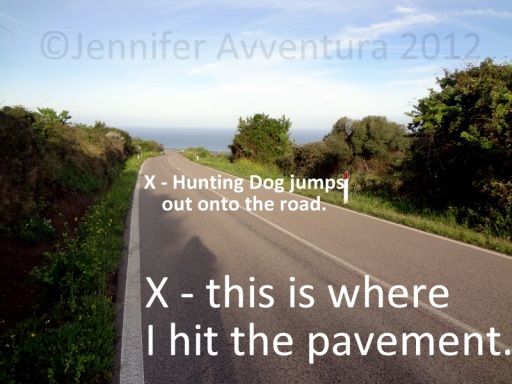 I stood back up and turned around, the half-way mark will have to wait for another day. I tried to run. I was running but it was very dreamlike – like I was stuck in quicksand; my legs could not carry me fast enough. I ran, I cried and I hoped to all heavens I wouldn’t meet a cow or horse in the road.

October is the start of hunting season in Sardinia and I’m generally aware of this –  but this morning the sky was blue and the sun was shining – I was itching to get out and run my wonderful 6k in the early Autumn air.

My case is this – why not post the hunting days in the local supermarket, the bars, the church, the post office and the newsstand? I’m not the only person that runs/walks along this road – there are plenty of elderly folk who enjoy a morning stroll along the same 6k as I, I even passed one such gentleman this morning.

What do you think of hunting season in Italy?

61 thoughts on “Hit the Ground Running | Hunting Season in Sardinia”